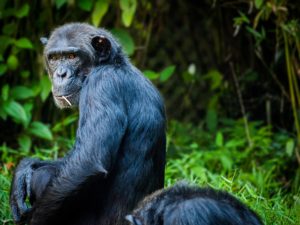 When talking about consciousness or awareness, a major key is being able to control the ego.  In Freudian terms, the ego can get complicated, but when I discuss it all I mean is that part of the personality that acts by impulse in the function of demanding wants and needs and of self-protectiveness and self-care.

It lets me know that I’m in trouble, whether physically or otherwise, and because my life is more structured and complicated than a series of impulses it’s easy for it be become confused and conflicted.  In fact, managing the ego, because of its impulsivity makes it challenging for me to control reactions I have with others when I perceive threats.

One analogy that gives a vivid picture of ego management imagines the ego as a monkey trying to get and keep something it wants, like a banana.   In the example, the monkey can be trapped by creating a hold too big for the monkey to withdraw its hand without letting go of its prize.  Because the monkey is so focused on its desire to keep the its desired prize, it does not let go of the prize to free its hand.

Using the analogy practically, there are many ways in which I might focus on a perceived need or threat, or might make a personal demand so important that I fail to see the forest through the trees, or don’t allow myself to be open to another perspective.

One way to distract my inner voice is to focus on someone besides myself, listening with enough concentration to remember what they have said, and be able to repeat it.  Therapists do this exercise routinely as a basic counseling skill, and are able not only to repeat what is said and how the speaker felt, but often to guess why what is being said matters to the speaker.

The nuances of raised eyebrows and tone of voice signal evidence of inward feelings and an underlying expressiveness.  Often, people will want to say something but don’t know how, and the body has a more difficult time with restraint than the tongue.   A skilled reading of body language can increase connection considerably.

Because the ego is self-protective it leans toward identifying accusations and criticism, both from others and from ourselves.  When I hear nine positive about myself and one negative my impulse is often to focus on the negative one before the positives.  Questioning such thinking helps me balance my perspective by filtering it before it turns into an accusation, criticism, character defect, self-loathing or negative belief.

Sometimes when someone speaks I feel like I know what they are going to say before they do and my anger grows before they’ve said it.  That goes for reading body language as well.  It’s  helpful to identify the difference between an assumption I’ve made verses fact, to realize why I’ve made an assumption in the first place, why this particular assumption was something I chose to land on.

Know When You’re Writing a Story 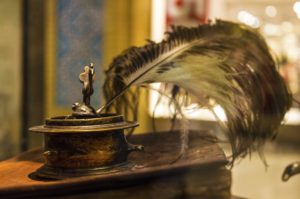 My ego is a natural private investigator and regularly provides me with suspicions of what people did, how they did it and why.  He would easily beat me in a game of Clue.  The truth is that I don’t know what I don’t know, but I might often try to guess and create a drama.  Since I’m self-protective and sometimes try to brace myself from future pain, creating worst case scenarios gives me an illusion that I’m in control.

Assume It’s Not About You Until You Hear Otherwise

Often people hear criticism when it’s not really intended, or hear stronger criticism when it’s not meant as strongly.  This occurs partially because people detect stress that is built up from everyday life that ends up feeling aimed at someone.  I might make an assumption that someone is upset at me when, really, they are just having a bad moment.  I won’t know until I ask.

When It Is About You, Realize That It Still May Not Be Just About You

Sometimes people do have legitimate complaints about me but their approach about the complaints stem from other circumstances.  If I receive both the complaint and the approach as directed at me, sometimes I might take a complaint personally.  But if I realize that there are a lot of things going on with the complainer I can sometimes talk inwardly into being empathetic for them and I’m able to shrug off unnecessary negativity.

Cueing myself into others’ personality styles is key to understanding their communication with me.  If you get the chance, look up personality differences at a site such as 16personalities.com just to see examples.  If I know someone well enough to expect the approach they may take, I can more easily see myself through their eyes and know how to respond to them in a way that best benefits us both.

Knowing Your Own Needs

Self-awareness is right next to ego management in being able to take care of myself.  If I know what I need I can set clearer boundaries, take on the right amount of tasks, be clear on my limits and communicate with others in a more confident way.  Achieving a stronger sense of it takes risk, trial and error, permission to myself to be wrong and let others down sometimes. 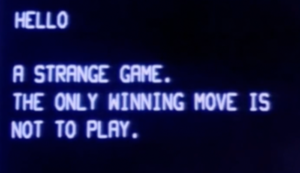 Take the Exit Ramp When You Have a Chance

In the movie War Games with Matthew Broderick, Professor Falkan’s computer program Joshua holds the Soviet Union and United States hostage while it plays a computer game connected to the US defense system.  Joshua is trying to figure out how to win a nuclear war, but must play through scenarios to come up with a solution.   The program concludes at the end “that the only way to win is not to play.”

When I get too angry that’s true for me too.  I’m capable of being both insulting and disrespectful, neither of which are helpful in solving problems.   If I perceive myself doing so, I gracefully take a time-out.

It’s worth mentioning that the inner-monkey doesn’t let go easily, but that it can be trained over time.  I literally identify my bananas so that I can be aware where my own beliefs go asunder.  When I’ve done so, I can much more effectively keep my ego in check.