The forty or so songs I have on my Spotify playlist help me to get through a long run every morning working toward a 10K race. My body screamed for a break toward the very end of my run, and as I lowered my heart rate and breathing, the late Kurt Cobain declared in his 90’s alternative style that “With the lights out, it’s less dangerous.”

The phrase got me thinking about what we do in our private lives is much more earthy, organic, and real than what we present to the world. Just yesterday I observed a Facebook conversation about how certain friends crop their photos so that the rest of the world can’t see their mess. Certainly, as we humans learn to be in public, our dark parts tend not to show easily.

The song, a favorite of mine during the 90’s, also got me thinking of today’s emotional climate. Brene’ Brown, a popular TED talk speaker and lecturer has several books out now and has called herself a “shame researcher.” When I first heard her speak about shame, I thought maybe she was overstating it, asserting that we have a shame-based culture, and discussing “shame resilience.” 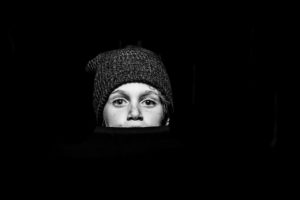 out, it’s less dangerous. I’m not even sure Cobain meant to go that deep with his lyric, but I was first reminded of a recent New York Times Op-ed article David Brook’s titled, “The Shame Culture.” Brooks, citing Andy Crouch’s 2014 “The Return of Shame” article, described the difference between a “guilt culture” and a “shame culture,” the first governed by conscience, and the second by inclusion or exclusion via public humiliation.

Crouch described social media as a new way of shaming people, via Facebook, Instagram, Twitter, or whatever—sort of an electronic scarlet letter to be displayed to the world at whim. The ensuing pattern that occurs with this type of shaming is public praise, which expects reciprocated praise, policing of behavior for those who break the group code, or rather for those who don’t “fit in,” and lastly a demand of instant respect to “fit in” and retaliation for not “fitting in.” The example given in Crouch’s article was the hacking of private information by gamers and the making public (doxing) of that information that may include past indiscretions.

The idea of shame vs guilt also reminded me of famed TED talker and self-described shame researcher Brene’ Brown, who fluently discusses the ideas of shame vs. guilt and fitting in vs. belonging. She discusses how most often fitting in is sought by people because they believe it is the best route to validation, but that research shows belonging is actually what people report brings the most happiness.

As I thought about Brown’s description of fitting in, several examples of this came to my mind, from the school setting, to the identification of people with tribes or groups, to the political climate, where most candidates try to fit in with the most groups, or at least attempt to posture themselves as fitting the best with the most groups or shaming the opposing candidate more than the other candidate shames them. Brook’s description of “perpetual insecurity,” “shifting judgment of the crowd,” “culture of oversensitivity, overreaction and frequent moral panics during which everybody feels compelled to go along” seems to describe fitting in to a tee.

Brooks contrasts this with people having identities that are “deeper and more permanent than the shifting of the crowd,” or having a “true North,” which sounds a lot like Brown’s description of belonging. Accordingly, if one’s goal is to be oneself rather than to fit in, then even if there is rejection from a social group, one’s goal is still met. One may still want to belong to a social group, it the physaud of pretending to be like people in a certain social group is automatically thwarted and unnecessary.

Though the process of belonging can actually take longer, it would seem that the process of finding true North and staying true would ultimately build more confidence in oneself and one’s identity. It also limits the insecurity of rejection based on which way the wind blows. The thought brings me back to the thought of the Nirvana song. With the lights out, it’s less dangerous. It’s more dangerous to try to fit in, because any moment one might not, lights or no lights. It’s less dangerous to be oneself–it might take longer but it will mean the right people. And when one is making a real effort to fit in, the aroma of “Teen Spirit” will fill the nostrils.