Not long ago I entered the Taco Villa drive through at an Odessa location with the intention of getting a bean and cheese burrito to tide me over for a couple of hours. Being fairly cheap, and at that moment needing fairly cheap food prepared quickly, reliable Tex-Mex seemed like a good option. Though I’m not quite to the point that I can eat Mexican food daily, I come very close. It really is my consistent favorite.

I made it to the speaker, and the voice coming through asked me if I wanted red sauce or green sauce. Being very used to the location in Midland I patronize the most, I momentarily forgot that it doesn’t use any sauce at all, and wondered to myself which sauce mine used. Being in a hurry, I also neglected necessarily inquisitive questions. “What’s the difference between the sauces? Is one hotter than the other?” You can already see where this is going.

Being in both an adventuro 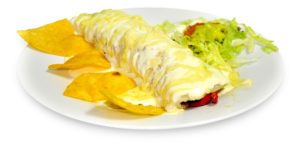 us and neglectful mood, I was asking for trouble. I thought to myself, “I’ll try green. Usually I’m sure I do red, but maybe the green will give me a different flavor.” The thought traveled through my head, left my lips, and had passed from the clerk’s fingers into her computer in seconds. I only prepared myself for a flavor I might not like, but for no other negative effects.

In just a few minutes I had parked and inhaling my green-sauced bean and cheese burrito, and in no less time after that my mouth was on fire. The conflicts in my head and body are both amusing and curious as I observe them. My tongue heated up with spice, which made everything that touched it, with the exception of water, cause spice burning to occur.

At the same time, my stomach is demanding enough that it can, in fact, convince me to ignore my tongue’s pain and ingest food. The burrito-eating experience was completed so, but in about three-times the time. Afterward, I washed my tongue with water from my drink and just let it burn. It may temporarily paralyze me, but eventually it will stop. And so, I parked, and I just experienced the burn and sat still.

Life is full of analogous comparisons to experiences such as this.

First of all, it’s rarely necessary to be in such a hurry. Often enough, hurry actually slows me down in the long run. It’s not that I should have no sense of urgency, but rather that slowing down is more likely to eliminate mistakes, or to catch possible problems. It’s better to catch problems before they grown, and one is more likely to notice them when traveling in life at a reasonable pace. I know that if I lose my keys or wallet, I’m always more successful if I’m moving slowly and methodically.

Second, though one could legitimately argue that there are stupid questions, it’s also unwise to avoid asking a question only because one is worried that it might be a stupid one, and many questions are merely mundane or clarifying, not stupid. If I had first slowed down, my realization that the clerk was giving me a choice of sauce would probably have gone from, “Wow, I don’t get that question at my Taco Villa” to “Oh, yeah, they don’t use any sauce,” or if my brain didn’t make it to that connecting dot, I could have answered, “I don’t get that question at my Midland location. What sauce do they use there.” Probably, the clerk would have said, “Ummm, Sir, they don’t use sauce at the location in Midland.” Stupid or not, it would have spared my tongue.

Third, thoroughness is not the same as obsessive-compulsive behavior, and it is often a good practice. When I feel lazy, it is easy to hurry through a job, or skim reading, or generally just be impatient at the very thought of working. The reality, however, is that hurrying, skimming and being impatient more often than not actually LEAD to more work. It’s best just to put on my big-boy pants, suck it up and do a careful job. During the order process, concentrating on what I wanted and communicating it as specifically as possible to the hearers would have done wonders for my eating process minutes later.

Needless to say, I followed none of the above rules in my burrito eating, the burrito stung, and I paid for my sins for twenty painful minutes. The silver lining of failing to follow these principles is that after repeated stinging of the tongue and other such lessons, I am reminded of said lessons, and they do serve as a gentle reminder, or sometimes a nagging voice inside my head. “Slow down.” “Take your time.” “Think it through.” “Pause.” “Chill.”