The word “bloom” brings to mind several visual images of roses, various flowers, and tended gardens of yesteryear. I’m reminded of my maternal grandfather, Laudius, who used to enjoy working in his garden with flowers. Unlike him, I never developed a love for gardening, or cooking for that matter. I tried to like gardening, I think because I thought it would make me feel connected to him, but when my hands became covered in dirt, they dried out, and I became uncomfortable. It gave me a feeling I didn’t like. 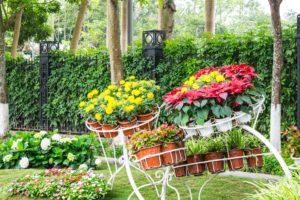 as looking at the garden in the morning. I am a morning person, and when I spent the night with my grandparents, sometimes I would awaken before them and go outside. In the dawn light, I would look at all the colors that were blooming. They were beautiful. And, I would watch the pool ripple in the wind. It may not have been a lake, but the water was still serene, and peaceful, if sanitized.

My grandfather was a serious gardener. Painstakingly he would care for each delicate flower. I remember the look of concentration on his face as worked each flower to make sure it was handle
d just perfectly. Sometimes it almost looked like he was in pain. He would always wear a hat to protect himself from the sun, and as he became older, it was a fixture. He sported several different hats over time, some bucket hats, some baseball caps, some cowboy hats. The garden was his shrine, and the cap part of his priestly garb.

Looking back, I’m not so different from the flowers my grandfather planted. My sister and I, fresh from a dissolved marriage, a disappearing father and a working mother, fell into the garden of my grandparents. We were carefully arranged in the garden by my grandparents and mother working to put us in a school close to the tending hands of my grandparents. As we grew up, we saw them almost daily, and they became surrogate parents in the absence of our actual parents.

It was they with whom we did homework, and with whom we talked about the fears and dreams of young children. Their neighborhood was the one we played in and had nine and ten-year-old adventures, back in the days before play dates….back in the days when our grandparents could say, “Be back in a couple of hours for supper, “ and relatively trust we would be OK.

Often, we would even spend the night, and my grandfather would sleep with my sister and I out on the balcony of the house, under the stars. Our young hearts sang in those moments, in the cool Kansas breeze, being in the presence of our grandfather, who at some point in our lives had become our best friend. So often, when we spent the night, we would tell him that we wanted to “camp out” on the balcony on cots.

In later days of his life, when we were grown up, and those times were distant memories of childhood, I visited him sometimes in a rest home that my mother and uncle placed him in. The latter years of his life he attended Bible Studies with my uncle, and they formed quite a bond, as did my mother, who frequently visited him. Alone, he listened constantly to books on tape, because glaucoma had taken his eyesight.

He had long since already put all of his heart into tending the garden in which my sister and I would bloom. We weren’t by any means the most cooperative plants, but he was patient with us, oh so patient. His gardening techniques manifested unconditional love, constant encouragement, lots of hugs, and general goofiness. He never hesitated to put himself out there to make us smile.

Over time, dementia eventually overtook his brain, and he passed. Even to the end, I never noticed him without his sense of humor. No cow was sacred to him. I’m reminded of a college graduation I attended, in which he loudly commented in front of a long-bearded professor walking by, “Look, it’s Osama Bin Laden.” Most of us smiled and shook our heads. Only grandpa could get away with doing something like that, being so close to 9/11. The memory still makes me smile inside. Lucky was I to have such a loving gardener to tend me.