I sit watching my youngest child, now eight years old, playing a game on his Xbox that he and his brother got a few years go, and the game displays a bizarre mix of Aladdin, Dory and Nemo all on the grass behind some castles. The game really shows my age because there was a time when characters and movies didn’t cross, except for sequels, or prequels, and now much of what I watch is a combination of Disney, Marvel and DC Comics.

Briefly, my son asks upon return, as if puzzled for a moment, why the fish are swimming on the grass. I had wondered that myself, but decided against belaboring the question too much since his world seems to be an evolved one compared to what mine was at his age. Most likely at eight, I was either riding my bike outside, wa 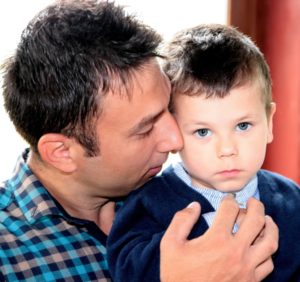 Intermittently, my son pops up with, “I love you dad.” This phrase is not unusual coming from him, it being common enough that if he were to stop saying it or to slow down, I’d actually be concerned whether her were okay or not. As I think about his particularities, I’m reminded of what a blessing it is to actually hear him say, “I love you” at all, him having had some really major issues when he was younger.

Unless one was schooled in early childhood development, it would be difficult to discern that, from a very early age, he displayed some delays and behaviors that alerted our concern for him about his future ability to talk, to physically feel things, and to interact in a normal way with his universe. Sensory Processing Disorder was a phrase with which even as a Masters degreed special educator I was unfamiliar. But when we became concerned as a family, the early childhood interventionists brought us this phrase and encouraged a specific set of tactile recommendations that would forever change our lives.

Hope was put on hold that he would experience the world as other children because he was in a fight to feel his body, strange as that seemed to me. But his behavior cried out warning signs. From the moment he could do anything with his leg, he bounced. The bouncing it was said, was in an effort for him to stimulate himself, feeling the weight of his body. Almost nine, he still bounces. We now have him in gymnastics.

But back then, he was like a nonstop wind-up toy among other peculiarities. He also liked drinking salsa and eating altoids. The interventionists recommended tactile aids such as routinely having him feel textures such as dried beans, or wearing weighted vests, or making sure he had swim time, or played with gym equipment. The regimen for him was so involved that my then spouse had to devote a large chunk of her time just serving as his main interventionist.

Now in his post-bean feeling, vest-wearing, talk-struggling, body-feeling, salsa-drinking state, he still bounces, if not constantly, a good amount of the time. He is learning his dad’s fluent language, sarcasm. He worships, and is picked on by his brother. Tonight both he and his brother performed at First Baptist Church in Midland for a summer musical, and he performed just as well as any of the other kids did, swaying when he was supposed to, following choreography, and probably thinking of going home and either watching You Tube or playing with his Disney Infinity.

This summer, his newest loves have been Quicksilver from the X Men movie Apocalypse and Joker from Suicide Squad. He enjoys alternately playing with Dory and Aladdin, then switching to You Tube and watching the Ballroom Blitz version of the Suicide Squad trailer. I am humored by the fascination with Suicide Squad because both boys fell asleep midway through the movie at the Drive-in, but I will admit that the movie itself has visuals that are very stimulating, which makes me wonder if that itself earns for him a special place in his heart.

As he interrupts whatever is happening every ten minutes or so and says, “I love you dad,” (He also says this to his mother just as often), I mentally redirect my initial response, which is “Yes, I know you love me, you’ve only told me how many times tonight?” and instead give thanks that my son can SAY I love you, and still does so regularly.