I sat patiently in the church sanctuary that had been chosen as the talent show venue for the students at my oldest son’s school while he and his young friends prepared to sing a group song they had been practicing for the talent show. A nine year-old, he had organized his friends together, and their act was opening up the show. The song number was from a musical he had performed with a theater in the fall, and so the whole family knew the music and the lyrics…easy peasy, lemon squeezy!

Unexpectedly, I heard my son begin singing what seemed to be a Capella and move around. I puzzled to myself, “Was this how it was supposed to go?” In a minute I heard the music go up, as if a cue had been missed. He continued to move with a seemingly choreographed direction, but timing of the music and what he was doing did not seem to match at all. The boys on the stage with him seemed to be singing, but I couldn’t hear either him or them very well.

Abruptly, it all ended and they exited the stage, all seemly unphased by the technical issues that ravaged the performance. I noticed that he was smiling, nonplussed. I was in a little bit of shock, both by how terrible the overall performance h 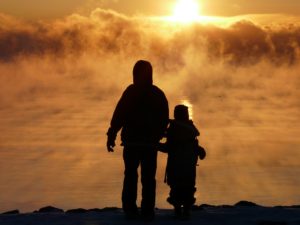 ad come off, and by how nonreactive he seemed to be. The rest of the show continued, some acts performing very well, and others having some similar technical issues.

I thought about his professional demeanor during the performance and following and my pride grew voluminously as I thought about his handling of the situation, how I would have handled the situation at that age, and how adept he was becoming at being a positive, resilient human being. My little boy was becoming a man! At nine! Thinking about this fact, I both wanted to embrace it and refuse it at the same time.

My thoughts during his show began to wander toward the maturity I’d seen him display even in the past several months. He liked to cook food at least once or twice a week. At school, they called him “the glue” that held his friends together. Over the coming weekend he would go with his grandparents on a trip to Corpus Christi to visit marine biologists because he has mused about becoming one when he gets older. I am planning on helping him get his junior scuba diving certification in the coming year.

As students performed contemporary pop songs to show the parent audience their talents, I reflected how easy it had been to be my son’s parent, and how he seemed to go on autopilot. Sometimes, it has seemed like he wasn’t even conceived of the same DNA because neither my youth nor his mother’s were nearly as seemingly successful as his has been.

And yet, when he wants to show us something that seems cool to him, or when he reaches out for a hug, or when he wakes up in the middle of the night and crawls in bed with me to cuddle, I realize I serve a purpose. I’m not merely the chauffeur, or the executive producer of his show, or the risk assessment analyst of his activities. I’m there for connection, to show him unconditional love and acceptance. I’m there to provide my version of adulting guidance.

I’m there to help calm him when he has become so frustrated with something that he’s crying about it. I’m there to comment how cool it is that he’s navigating today’s current feature of one of Minecraft’s nether regions, or to fake being wounded as he points his iron man arm at me and the weapon sound erupts from his Playmation toy. And I’m there to help guide his nine year old ego through the process of feeling through his thoughts as he gets in trouble for something negative he’s done to his eight year-old brother.

When I think about it, I know that I’m there for a lot of reasons and he really needs me. But as he gets older and seems to really walk more steadily in his man-shoes, I still continue to marvel that I was ever given the privilege of being father to this child who mostly seems to grow into himself in spite of me, not because of me.